Create an Account - Increase your productivity, customize your experience, and engage in information you care about.

The implementation phase of the JLUS was intended to convert recommendations identified in the original study into actionable activities. This process was guided by the JLUS Implementation Committee, established by the Plaquemines Parish Government, to develop the implementation tools necessary to successfully complete the JLUS process.

The Implementation Committee was subdivided into two working groups: the Technical Group and the Policy Group. The Technical Group was composed of professionals and community representatives that reviewed the available data and made recommendations based on their areas of expertise and experience.

These recommendations then went before the Policy Group, consisting of elected and appointed government officials, for review and adoption. Each implementation tool adopted by the Implementation Committee then proceeded to the appropriate government body for public review and enactment.

The MIPD Overlay Zoning District (PDF) was adopted as an ordinance by the Plaquemines Parish Council on September 11, 2014. The district serves the Implementation Committee’s goals of preserving the mission readiness of NAS/JRB New Orleans while being sensitive to the development rights of private property owners in the area. The district sets minimum regulations for building height, lighting, steam and smoke, and electronic communications interference within its boundaries. 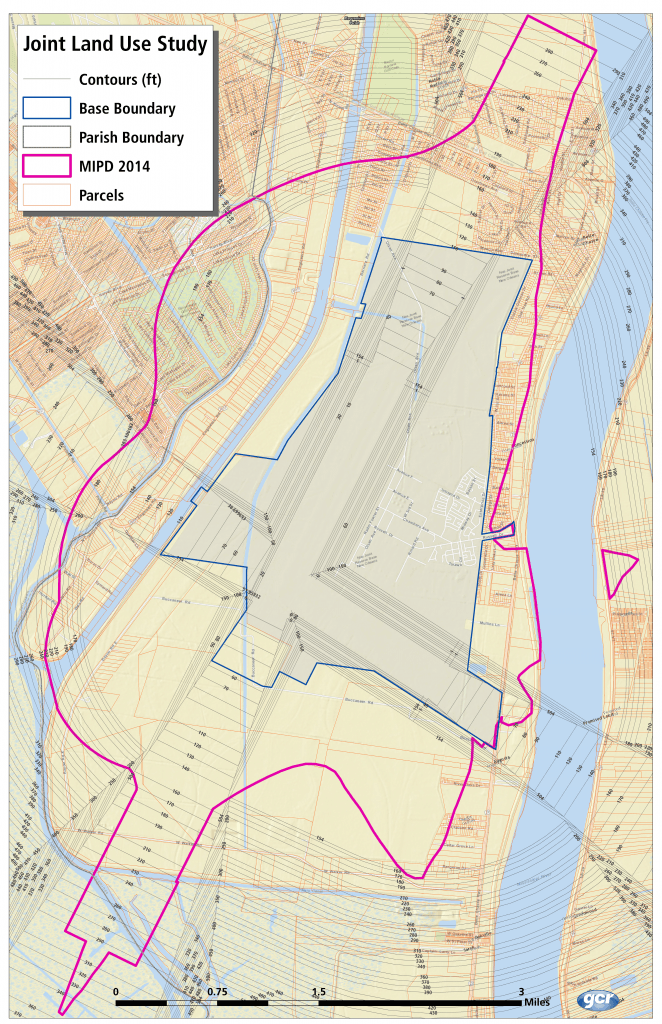 The map provided illustrates the boundaries of NAS/JRB (in blue), the MIPD Overlay Zoning District (in pink), and height limit contours over parcels. The Overlay District dictates that any existing height limit lower than what is shown on the map shall take priority, for instance, the current height limit in residential zones in Plaquemines Parish is 35 feet, so despite this map showing height limits much higher than that, it would be 35 feet.

The district also directs the building official to notify NAS/JRB officials of any applications to construct electronic communications facilities or smoke/steam emitting structures. Construction of commercial wind turbines is prohibited.

Additionally, lighting is regulated within the district including a requirement that all exterior lighting face downward and illuminated signage be screened such that it cannot be seen from 30 feet above.

The Memorandum of Understanding for Military Coordination is a non-binding agreement between Plaquemines Parish, Jefferson Parish, NAS/JRB New Orleans and the newly formed Joint Land Use Working Group to formalize the relationship and sharing of information between the parties. It requires the parishes to notify the Base of land use and development proposals within the MIPD as shown above, as well as requiring the Base to notify the parties of any changes that can effect the Parishes like changes of gate location, additions of housing and major mission changes.

As a part of this JLUS Implementation process, the Implementation Committee felt strongly that there should be some kind of mechanism for disclosing proximity to the Base without impacting property values. It was eventually decided that the best way to do this would be to ask the Louisiana Real Estate Commission to add specific language to their standard purchase agreement and disclosure documents to allow purchasers to do their own due diligence but be notified of the property’s proximity. Local governments offered letters of support to the LREC to make these changes on behalf of the Base.